In November, at the end of the rainy season, we celebrated the reversing of the currents of Cambodia’s Tonle Sap River. The country had no king to command the Tonle Sap to reverse direction, but Mai assured me that the waters would subside, thanks to the tidal pull of the full moon. The Bon Om Tuk water festival was not the usual grand ceremony. But people converged on the banks of the Sangker River to see the arrival of the dragon boats to Battambang. Small orchestras of gongs and drums played rhythmically, accompanied by singers and royal dancers, as the boats sailed up and down the chocolate brown river waters.
A glowing ball of a moon rose behind the tall, green trees that grew on the riverbank. Most of our family gathered there, and I sat wedged in a comfortable spot between Mai and Tha. I was concentrating on digging my toes into the cool grass, when to my surprise, I saw the boy musician, Nary! He walked hurriedly by, toting two baskets filled with coconuts; balanced on each end of a piece of bamboo resting on his broad shoulders. Even with his big straw hat on, I was sure it was Nary. Without thinking, I called out his name.
"Na-ryyy!"
He looked over in our direction as I waved. My hand seemed to have a mind of its own. He stared my way but he did not recognize me. I clicked my fingers in the air as if I was playing imaginary finger cymbals, and his face lit up. He remembered our music under the old house back home.

"Oh, hello there, you, from Koas Krala!" he called out, stopping to bow his head in our direction.
I placed my palms together and bowed my head in return. Nary smiled, then turned and continued on his way. I felt my face flush and hoped that no one noticed.
"Chanra!" said Tha, bringing me back to the real world. "Here come the apsaras!" 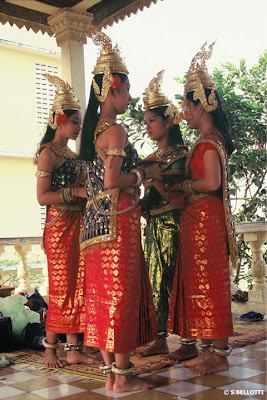 The beautiful celestial dancers appeared and enacted their sacred stories, swaying in their bejeweled velvet and brocade costumes, and golden headdresses. A chorus sang about being surrounded by flowers in a garden. The apsaras’ poses and slow stylized movements expressed the wisdom of the ages. We celebrated, forgetting about our country’s problems, if only for one night.