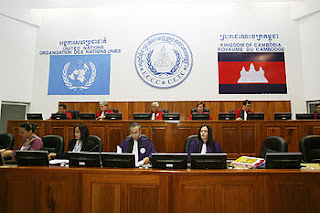 
I scribbled out this post one night, planning to enter it the next day. I wrote it from a journalists point of view. In the morning I received a wake-up message from another killing fields survivor friend of mine overseas who is still struggling with the memories, more than 30 years later. I know that I have no right to tell a story about something I can't possibly understand without having lived it. I have never even been hungry. But I'll do what I can to contribute to a better understanding of what happened in Cambodia. I gave the novel my best effort. Reporters sometimes have to ignore the true atrocities of a story to deliver it. I feel bad about that.
Posted by Karen Harlow at 1:19 PM