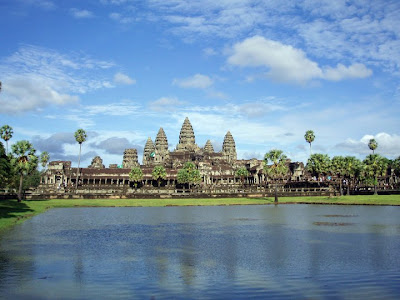 Grandmother Sei comforted me.
“Think happy thoughts, Chanra,” she said.
“Tell me about the God city,” I asked, resting my head in her lap.
“Deep in the jungle sits the sacred temple of Angkor Wat, the largest shrine in the world,” she began, her angular face and close cropped gray hair illuminated by candlelight. “The temple was once the heart and soul of the most powerful empire in all of Southeast Asia, a monument to the power of a king, made into stone. It was an expression of devotion to the Hindu deity Vishnu. The sanctuary once held a gold statue of this eight-armed God, mounted on a garuda, a half-man, half-bird creature. From there, the mighty Khmer empire was ruled. May you one day climb the immensely steep stairs, as if to reach the kingdom of Gods. But only those who are meant to will ever see this sacred place.”
I closed my eyes. I pictured myself standing at the top of the temple with towers like lotus buds. I memorized the lessons Grandmother Sei shared with me, like no cheating, lying, stealing, or harming people or animals.
“Let the kindness and honesty in your life be what helps you one day ascend the mountain,” Mai added.
“I believe I will,” I told her, and I felt a connection to the ancient people of Angkor.
Posted by Karen Harlow at 7:04 PM